I met David and his friend Elly in Woodford. Everyone was travelling together in one car – easier to talk that way. As we clambered into David’s big white truck, with the camera poised to record our journey from the front passenger seat, David casually began to tell his story. ‘Hopefully today’, he said, ‘I’ll get to explain one of the little pathways that my mum used to go along when she was a little girl and talk about various spots along that way; where she was born, and what it means to me.’

We were racing the sun to tell stories and to visit the pathways and places significant to his history telling: sharing his knowledge of country, his connections with family and his links with the landscape; remembering the stories told by his mum of growing up in The Gully and surrounding country, and remembering his own experience of growing up and learning about the land and his heritage.

The Gully is a place of Sweet Water; His mum was born there but left as a young girl to live in Katoomba with an English family. David recalled a story he enjoys remembering, told to him by Aunty Jean.

‘My mum was always climbing up a tree, and sitting there watching her family …. I’m never 100% sure if that is because it was when she was removed and she wasn’t allowed to talk to them but it was always that story of my mum just sitting up a tree in The Gully.’

He remembers many stories being told to him about the adventures of kids: picking fruit and berries, walking in the Megalong Valley, along the Great Western Highway, up past Nellies Glen, up to the Hydro Majestic and down into the Megalong Valley and spending time; eating the turtle and traditional fire stick farming … all the little snippets of information which over time, build connection.

David explained his family ‘used to walk from the Megalong Valley, up to Katoomba, Wentworth Falls, out along the ridgeline through to Picton and there are various meeting places with the Dharrawal, Darug and other tribal groups to the south.’

Granddad Essie decided to get a piece of wrought iron. He said to the blokes around him in The Gully, ‘I’m going down to the Falls and [I’m] going to jump off, I’m going to fly across the Mountains and paint them blue!’ He was such a good storyteller, we all believed him! Your Grandad then walked off towards the Falls! We all got worried and took off up town and got the local rescue squad. As we were belting down the main street of Katoomba heading towards the Falls I spotted your Granddad coming back up the hill laughing his head off because he knew that he got us!

One of David’s strongest connections to Country is to all the plants and animals of the area. He loves its beauty, the colors and the gum trees. His goal over the past 10 years has been to go to bush tucker areas where he knows his family walked, and to try to regenerate the bush.

‘I can imagine sitting here … with all the camp fires, you could just imagine the sounds, the Uncles and Aunties, Granddads and Grandmas sitting around, the kids playing sitting over there, the fires burning, the stories being told … There are many beautiful stories of this area, and there’ll be more to come as we start to work through here and start to see that whole connection just re-grow.’ 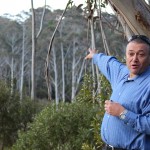 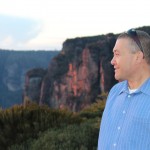 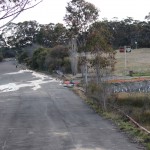 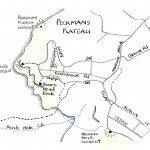