Don’t Deny Me My Heritage

Leanne Tobin is a Darug artist and playwright. She grew up in Western Sydney, and was born in NSW in a place called Warratah, in Newcastle; ‘Warratah being a Darug word, it’s sort of ironic’ she said.

Leanne found out about her family’s Aboriginal heritage in 1984 or 1985 when she was living and working in the Northern Territory.

‘My cousin, doing our family history, researching back and she found all the links, and they’re very much concreted in, you can see it, I can’t believe we missed it, but it was because it was so much a taboo topic, no-one talked about it so within mum’s family anyway, it was kept very quiet.’

In 2011, Leanne won the Parliament of New South Wales Aboriginal Art Prize. Creating her artwork, Defending Country Leanne purposefully set about ‘painting a pale-skinned woman, holding a shield, on country, with her ancestors all around her, with demolished trees being cut down in different sizes, and cleared land and fences …. It showed a passive stance against that, by saying we’re still here, we’ve changed color but our ancestry’s here, it’s connected to here, we haven’t gone away, we’re not going away, and … we’re going to defend country no matter what.’ 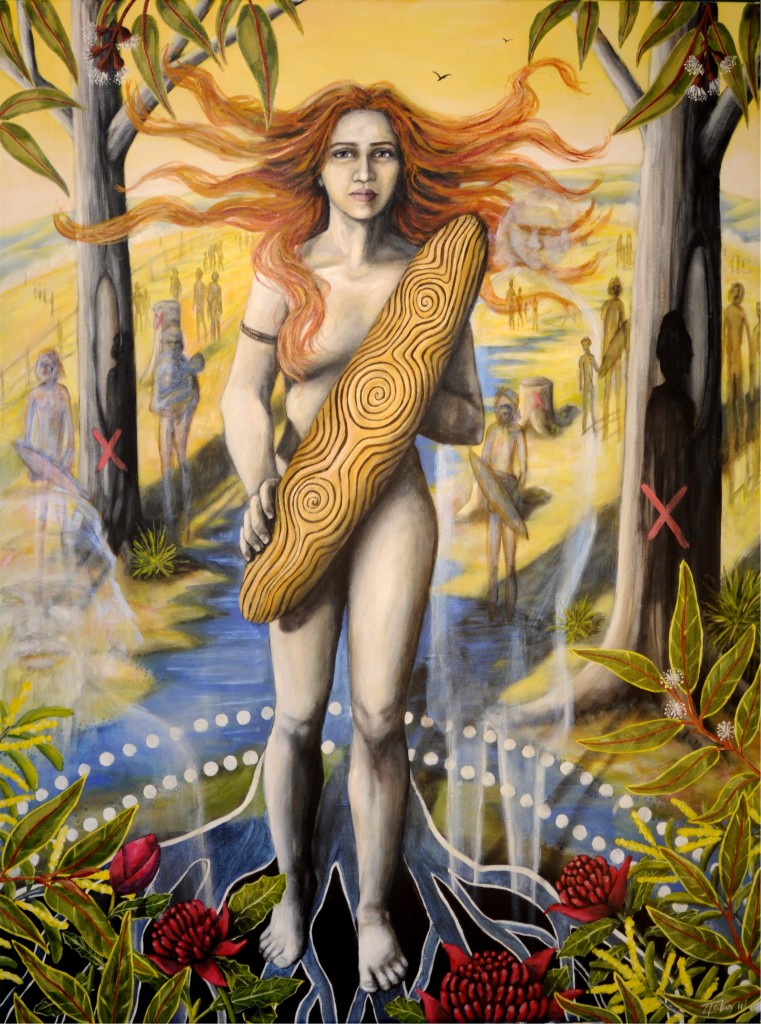 ‘I [came] across Maria Locke’s story and just thought wow! … I knew of the heritage, but I didn’t know anything about her. I knew we were related to Yarramundi, not so much Maria Locke. It was only later, when I found out about Maria Locke, when I thought, wow! This woman is amazing! You know, acquiring land in the early 1700s 1800s, she was ah, quite an amazing woman! And fully literate, so she was writing letters to the Government you know 1815, 1819, 1832, you hear of her quite regularly through her letters, so I thought you know, this story needs to be told! And that’s where I started getting into public awareness I suppose.’

As soon as Leanne found about her Aboriginal ancestry, ‘it just made sense,’ she explained. ‘Everything I was actually doing just started to fit into place. It was almost serendipitous the way it all happened.’

It was important for Leanne to move up to the mountains, to a place that is ‘surrounded by bush, and conducive to her doing her artwork … the perfect camp …. Traditionally this place would have been a pharmacy, supermarket, its got everything you need here, it would have been fresh water once upon a time running through here … it just made my heart sing when I moved here.’

‘It’s almost like the spirits are supporting my quest to put forward their story.’