I met Margaret at her home in Sans Souci, a place she has lived with her husband for over fifty years, and where she raised her family. Sitting out in her backyard, we had to continually pause our filming and conversation as the planes grumbled in the sky overhead, and her neighbours enjoyed a party next door.

‘Would you mind being quiet please? We‘re making a film about my life.’

Always thinking she had moved away from her community and family at Botany and at La Perouse where she grew up, she was surprised to learn when she moved to Sans Souci that she had in fact unknowingly returned to the Country of her Indigenous ancestors.

She explained, not having her mum handy when her own children were growing up: ‘We sort of got away from that [learning about history, place and identity] for a while …. It’s just this is the way we are, this is who we are, I don’t ask questions.’

Margaret was however, lucky to know her grandparents, the people who first appeared in her daughter Karen Maber’s quest to find out more about the family’s Aboriginal history.

‘I was lucky enough … to know my grandparents, the Aboriginal side Albert Butler and Eliza Butler. Gorgeous. Gorgeous grandparents …. I’m the eldest of five … and I used to love sleeping at their place on a straw bed … no electricity, in the shack …. They lived where the old school is now, Yarra Bay Public School. My parents were the caretakers, and they cleaned it.

Margaret remembers her grandmother Eliza, spending time with her at La Perouse, where she grew up.

‘[She was a] full Aboriginal … very skinny … [and]  black, pitch black! … She had white hair pulled straight back. Margaret’s mother told her Eliza ‘used to dye her hair, however one day it went red, so she decided to wrap her hair in a towel, and about a day later, when she pulled the towel off her hair it was milk white, and that’s how it stayed until she died.’

‘My grandmother would go and play cards for days on end, and she’d take me with her, and they’d have a big pot of stew on for anybody that went there, and we’d all play with the kids, and then they’d just say we’re all going home now … dirt floor, yeah there was no lino. It was an old tin place, and I don’t know how they cooked, they must have just had … a big boiler thing hanging over the fire.’

Margaret also remembers spending time at The Loop at La Perouse, with her mum; helping her to create shellwork to sell to tourists visiting La Perouse and to a Chemist in Manly. She remembers riding the ferry across to Kurnell and watching her cousins dive off the pier for money.

‘If people had sixpences or a zac they used to call it, they’d just throw it in and my cousins would dive in, put it in their mouth … that was big cash!  …. I never dived for it, I couldn’t swim good enough!’

‘When mum was selling the shellwork, which was in the main strip going down to the wharfs, from the tram, people would come and they’d say, ‘Oh! Look at all those black people!’’

‘Every family had its different style [of shellwork], and some were bigger, some were smaller, so, mum’s always told me Nanna always did very dainty work. And we’ve come to love that.’

‘As soon as mum would sell a pair of shoes or something, we’d get an ice-cream… I had an uncle that ran the ferry from La Perouse to Kurnell, and we’d get free rides from there all day long! We’d get sick of that and come and get another ice cream!’

‘I’d come home from going to the movies of a night-time and she’d be running late and say come on, you’ll have to help me girl, come on girl lets get this done …. Mum used to specialize in about 12 inches long … Sydney Harbour Bridge … and she had the daintiest little shells on it you’ve ever seen … even the strings had glitter down the sides … and it had velvet around the edges …. We used to have to walk for days and days and days and days on the beach, looking for shells …. Mum used to take us out to Cronulla, and that’s where you get the colored shells and then you’d get a certain shell out at Kurnell, for different parts …. She used to make little shoes … and they had the velvet around it, and they had the glitter, always a little bit of glitter, over the top of it, in amongst the pretty shells, and she’d make a jewel box … and it was shaped like a heart, and you’d lift it up and inside was satin, the outside was always the velvet … and it sold really, really good.’

When Margaret and her mother worked to sell their shellwork at La Perouse and at a Chemist in Manly: ‘I used to have to take days off school to help her take it [the shellwork] … in a big suitcase, pack it in, and she’d say, come on, we’ve got to go to Manly today … that was a big payday for us.’ 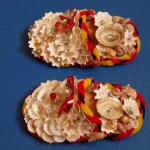 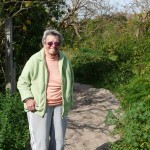 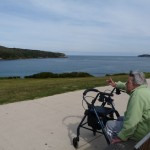 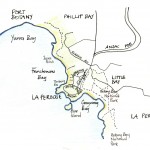