Nikki is a Darug and Yuin woman with Wiradjuri blood-lines. ‘It just means that my ancestry comes from the Yuin people as well as the Darug and Wiradjuri people.’

Honoring both sides of her ancestry, she says, ‘you’ve gotta acknowledge what land you’re on first … and you acknowledge as far back as you can’. In 2007, Nikki discovered her family history in the book The Darug and their Neighbours: The traditional owners of the Sydney Region by James Kohen.

‘The information was all there, where my grandmother’s people originally come from. She’s the descendant of Johnny and Betty Cox, Johnny was an Eastern Creek man, just down the road here … and my grandmother comes from Cattai clan, out there, Cattai-Windsor area. So it was like, oh my goodness. I’ve been running away from this place all this time, itchin’, having to get to the coast to be surrounded by people and family …  when all this time, I’ve always been!’

‘We’re very lucky that this information has been recorded …. For my grandmother Betty Cox, one of the first kids into the Native Institute … that recording’s there. She didn’t even have a last name!’

Born in the old green hospital in 1974, Nikki was raised in Parramatta as a Yuin woman with her family. At that time, there weren’t many other Aboriginal people they knew in the area.

The family soon moved to Toongabbie and as teenager, Nikki remembers going down to a creek at Old Toongabbie:

‘A group of us, friends and I … late at night, you’d be sitting on the side of the creek, and the fog would be coming up, and the next minute you’d start to hear like, a battle happening. It was really bizarre, and we’d all get up and run, across the paddock, and as soon as you’d get half way across the paddock it would stop, and we’d all look at each other, like, was that for real? And, next time we’d go down, the same thing would happen, and of course in later life, that’s where you find out that’s where a lot of battles or massacres would happen, so even back then, that energy, we were still picking up on it’.

Nikki has always been a very spiritual and a very cultural person, a trait passed down to her through her family, particularly her Grandmother. Encountering spirits and angels since she was a young girl, she now uses them in her work.

‘We’ve always had that thing [in our family] of spirituality, everything is energy, respect for everything around you, you will see things that other people don’t see … so just always be true and connected to who you are.’

Nikki spent every holiday down on the South Coast at her grandparents’ house on Kianga Creek with the rest of the Aboriginal family. ‘They were fun times, they were the best times,’ she said.

‘It wasn’t a big house, but they had all these beds, just all in a big line, and we’d be jumped in and sharing head to toe, it was community, everyone would just be crammed in.’

‘My grandmother would send us out on little missions, we’d either go to the front paddock and collect blackberries for her to make her blackberry pies for us for Christmas … and we’d have to go bush to collect these kinds of ferns …. We’d come back, and my job was to weave them together so they could be put up into the roof of the out-shed to keep it cool for us all to sit under. And I never realised it was a lesson, it was fun! …. It was all about helping and keeping that space cool for everyone …. It was only a few weeks ago (when I began the weaving workshops) I thought, oh my goodness! This is something I have always done this is some thing I had to do every holidays.’ 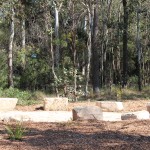 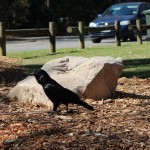 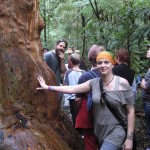 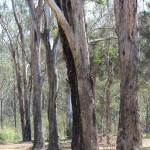 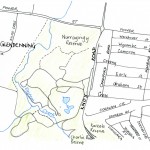