This Is Where Fun Happened

‘History is so much of an adventure I think,’ said Peter as we balanced on the damp, slippery bank of Ropes Creek.

‘The whole area is really important to me I think … where we grew up.’

Peter’s family is originally from Glen Innes, but for him, that’s not where home is.

Peter has lived in Western Sydney from when he was about 18 months old, until he was fourteen. He used to hang out with his younger brother and explore this place and over near St Clair.

‘Definitely this area and [where] St Claire [is now], (mind you it was all bush back then), were two frequented areas by myself and my younger brother.’

‘We lived in Desborough Road, maybe three or four kilometers at most [from Ropes Creek], we used to come down here on pushbikes and just hang out …. Coming into the bush has been something that has always been really important I suppose. I’m not sure where that necessarily comes from, whether it was from family holidays when we were younger, or whether it was just a desire to get away from the metropolis … a strong desire to go into places like this … probably a lot of people feel that way in these areas. And probably kids still come down here and do the same thing as we did.’

Looking back, Peter doesn’t remember Sydney being a dangerous place. He explained:

‘It was exciting coming down here. It was a little bit naughty I suppose as well, you felt like you were doing the wrong thing … but also just getting away from the real world.’

Peter and his brother used to jump on their pushbikes and explore all day the bush and different sites. As the suburb of St Clare progressed they crossed the Bennett Road Bridge linking the then bush and the suburbs. They explored the growing housing development getting up to mischief ‘doing things that kids do’.

‘There really wasn’t a great deal to do. There was no such thing as an Xbox or playstation or video game. The VCR was only brand new, tapes were very very expensive and … television [stations were] still developing overtime.’

The environment of Western Sydney was changing quickly. ‘Eventually they started chopping down trees and they started building roads (at St Clair) … we started exploring and at one stage as the storm water network started getting bigger and bigger we would crawl into the tunnels and we would know exactly where we were at any one particular time because we were there when they started building these tunnels! … You could crawl in and out and you could be in there for quite a few hours! The only thing we were worried about was getting our push-bikes knocked off.’ 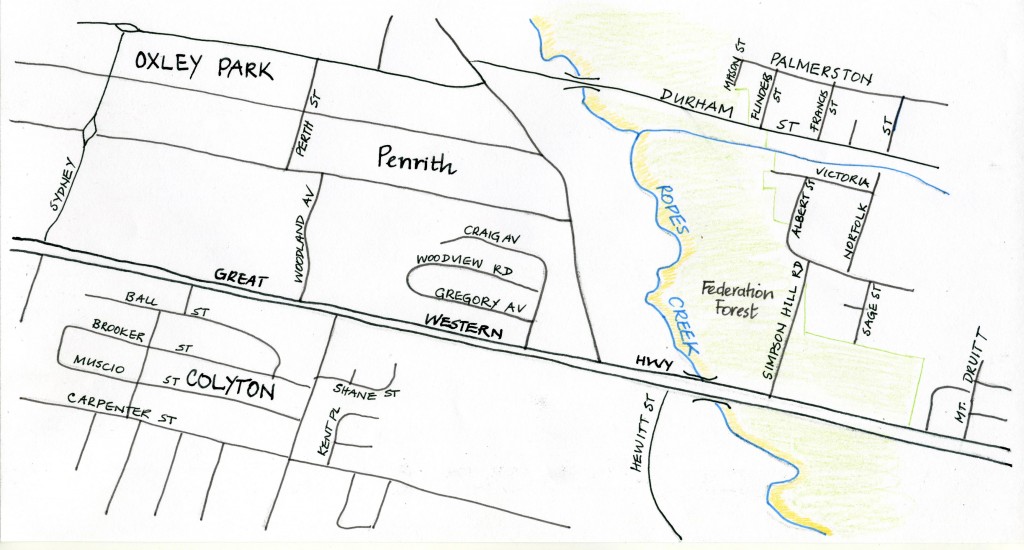 Looking back, Peter explains, he was going back to the bush because that’s exactly what it was, ‘it was just jungle and bush.’ Reflecting on his experiences as a young child, perhaps he mused, he was reliving or re-enacting ‘really really cool times’ spent with his uncles hunting foxes and kangaroos in the Hunter Valley.

‘So this is where fun happened … and this was the exciting bit!