What kind of entity essentially is a social robot, what is its true purpose, and how do we assess its significance for our lives? Are robots meant to replace/overtake, extend/augment, or imitate/represent human? To address these philosophical questions, I propose a speculative approach to human-robot interaction inspired by virtue ethics, recognition theory, and constructivist epistemology. I illustrate this approach allegorically through Mario Collodi’s famous children novel Pinocchio. Pinocchio is the literary prototype of a social robot and every social robot is, in some sense, an instantiation of Pinocchio. That is why the key elements of Pinocchio’s story tell us something about human-robot interaction: Pinocchio is a marionette that aspires to become a person; Pinocchio is created by Geppetto (the poietic ingenuity) for this purpose, but it is the Blue Fairy (empathy and social interaction) that makes the transformation possible; Pinocchio is a pathological liar, but cannot hide his deceptive intentions; Pinocchio can become a person only when, instead of deceiving others, develops an authentic concern for them. This “Pinocchio doctrine”, as I call it, gives voice to the intuition that, if we want to correctly define their ontological, axiological, and moral status, social robots should neither be conceived as slaves nor as companions. These two antithetical options presuppose the same paradoxical normative view of human-robot interaction, one that is rooted into oxymoronic dyads (ownership/autonomy, subordination/decision, instrumentality/personhood). To make sense of their value, I suggest social robots should be first of all understood as human creations and, more specifically, as proto-creatures – that is, a particular subset of creations meant (but not necessarily able) to recognize and be recognized by a social other. Even if the creature is originally tied to its creator, their bond is established only to be transcended: the ideal creator is the one who welcomes the independency of its creature, and an accomplished creature is the one who eventually achieves autonomy from its creator. The irreducible tension between these two aspects of the social robot explains why we are unable to ascribe rights to robots, which we own as our own tools, and yet we must give some moral consideration to them, as we inevitably tend to value their autonomy, even when incomplete. These considerations justify a constructivist and relational framework to articulate the ethical, epistemic, and aesthetic value of social robots. Relying on this conceptual framework, Pinocchio doctrine allows us to clarify the status of robots as moral patients and agents. Also, it indicates whether obligations, rights, and legal liabilities apply to social robots. Ultimately, it suggests a virtuous way to design robots, to behave with them, and interpret their role in our life. 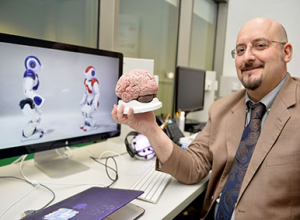 Massimiliano Cappuccio (PhD, State University of Pavia) is a Research Associate at the University of New South Wales, where he is also Deputy Lead (Knowledge Exchange) of the Values in Defense & Security Technology (VDST) group. He has a secondary affiliation with United Arab Emirates University, where he is Associate Professor of Cognitive Science and Director of the Cog Sci Lab. His work as a cognitive philosopher and a philosophical psychologist addresses both theoretical and applied issues in embodied cognition and social cognition combining analytic, phenomenological, and empirical perspectives. His publications have covered topics like: motor intentionality and phenomenology of skill and expertise; unreflective action and choking effect; joint attention and deictic gestures; empathy and mirror neurons; social robotics and technology ethics; artificial intelligence theory; implicit knowledge and the frame problem. He is one of the organizers of the annual Joint UAE Symposium on Social Robotics, hosted by United Arab Emirates University and New York University Abu Dhabi, and the International Conference in Sport Psychology and Embodied Cognition, sponsored by Abu Dhabi Sports Council.